An Unforgettable Tanzania Experience to some of Africa's finest and most exclusive attractions.

An Unforgettable 14 Days  Tanzania Experience to some of Africa’s finest and most exclusive attractions.

On arrival at Kilimanjaro International Airport (JRO) in Arusha, our driver will receive and drive you to your designated lodge/hotel for the night.

Wake up for an early breakfast before going on a morning drive round Arusha Town. See the beautiful architecture in this Swahili town as well as the beautiful culture. Drive back to the lodge in time for lunch. After a sumptuous meal, take a drive to Arusha National Park. The park is famous for being home to black and white Columbus monkeys; it is the only park where you can find them in Northern Tanzania. In addition, you will have the pleasure of seeing animals like giraffes, zebras, antelopes, leopards, shy forest duikers and velvet monkeys. Drive around the beautiful Momella Lake, which is surrounded by thousands of flamingos. The landscape at Arusha National Park is also a sight to behold especially because it stretches out towards the famous Mt. Kilimanjaro. If time allows, you will also take a guided hike on the forested Mt. Meru or Nguruduto Crater.

Drive back to your lodge for an overnight.

Today you will explore Lake Manyara National Park before heading to Ngorongoro Farm House. Wake up early in the morning and get a packed picnic breakfast and lunch. Thereafter, the driver will pick you and drive you Lake Manyara National Park for a morning game drive. At this time, the weather is cool and neighboring surroundings silent except for the beautiful sounds of singing birds. The park is made up of tropical forests comprising of mahogany trees and lush vegetation. You will have the pleasure of seeing animals like antelopes, giraffes, zebras, buffalos and elephants, which come out early to graze before the sun gets too hot. Monkeys and hippos also inhabit the park. The famous Manyara lions, popularly known for their unique habits of tree climbing are also found here and if lucky you might spot some of them.

Wake up early for breakfast and thereafter head to Ndutu Plains. For those interested in learning more about the Maasai culture, you can request to make a stop at one of the Maasai Villages along the way. Drive to the Olduvai Gorge, also known as the Cradle of Mankind and learn more about the origin of man. This is the gorge where anthropologists Mary and Louis Leakey made discoveries about how man originated in Africa.

Take your picnic lunch as you proceed with your journey. Drive to your lodge for an overnight.

After breakfast, you will leave for Lake Ndutu and Lake Masek. At this time of the year, the migration season, Lake Ndutu hosts many wild animals. This is because of the beautiful vegetation that provides enough food for the animals. The vegetation comprises of short grass and woodlands. Ndutu Conservation area is famous for being home to the big cats; leopards, lions, cheetahs etc. and acts as a researching ground for many researchers.

Return to Ndutu Safari Lodge in the evening for the night.

After an early breakfast, leave for Serengeti National Park, where you will enjoy a full day fun-filled and exciting game drive. Serengeti National Park is among the most famous parks in Africa and the most famous in Tanzania. It is here that the wildebeest migration begins. Millions of wildebeests and zebras leave Serengeti between July and October and cross over the Mara River into Maasai Mara in Kenya. Later, the wildebeest cross back into the Serengeti at the end of the year and the calving season begins in January. It is quite a spectacle watching thousands of wildebeests giving birth in the wild.

Drive to Kati Tented Camp in the evening for accommodation.

Today you leave for Ngorongoro Crater after breakfast. Enjoy a game drive across the Central Serengeti towards Ngorongoro Crater via Naabi Hill Gate. If you did not make a stop at Olduvai Gorge or the Maasai village on Day 5, you will visit the two sites on this day.

Wake up an early in the morning and received packed picnic breakfast before proceeding to Ngorongoro Crater. The Crater named one of the Wonders of the World is among the largest volcanic craters in the world.  It is home to over 25,000 animals like the black rhino, Thomson’s gazelle, the Cape buffalo, Maasai lions among others and bird species like flamingos etc. Ngorongoro Crater is 20 Kilometers wide and has a depth of between 610 – 760 Meters. Vegetation in the crater comprises of forests and grasslands. Other features found in the crater are swamps, saltpans and a fresh water lake, which attracts vast birdlife.

Enjoy a picnic lunch in the scenic crater before driving up to the rim of the crater where you will get an aerial view of Ngorongoro Crater. Drive back to the lodge for the night.

Wake up early in the morning and drive to the crater for an early game drive. Picnic breakfast will be served here as you enjoy the scenic view of the landscape and the peacefully grazing wild animals. Drive back to Ngorongoro Sopa lodge in the afternoon for lunch. Thereafter depart for Tarangire National Park.

For the net two nights, Tarangire National Park will be your home. This is the third largest National park in Tanzania. Take a shallow game drive in the park where you will spot herds of wildebeests and zebras. Migration in this park begins in October with zebras and wildebeests followed by elands, oryxes, gazelles, and hartebeests. Elephants migrate last. Animals like impalas, giraffes and Defassa waterbucks remain at the park. Other animals that you will spot here include leopards, lions, cheetahs and vegetation comprising of baobab trees.

Drive back to Tarangire Sopa Lodge for the night.

You will embark on a last game drive and nature walk in Tarangire National Park after breakfast. Thereafter, our driver will pick you and drive you back to Arusha.

This is your last day in Tanzania. End it by taking a drive/walk around Arusha Town and thereafter drive to the airport for a flight back home.

All our safaris can be tailor-made just for you. Whether you know exactly what you’re looking for or need some expert advice, we’ll help you create your perfect East African holiday. 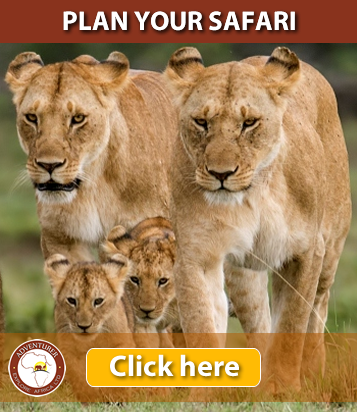